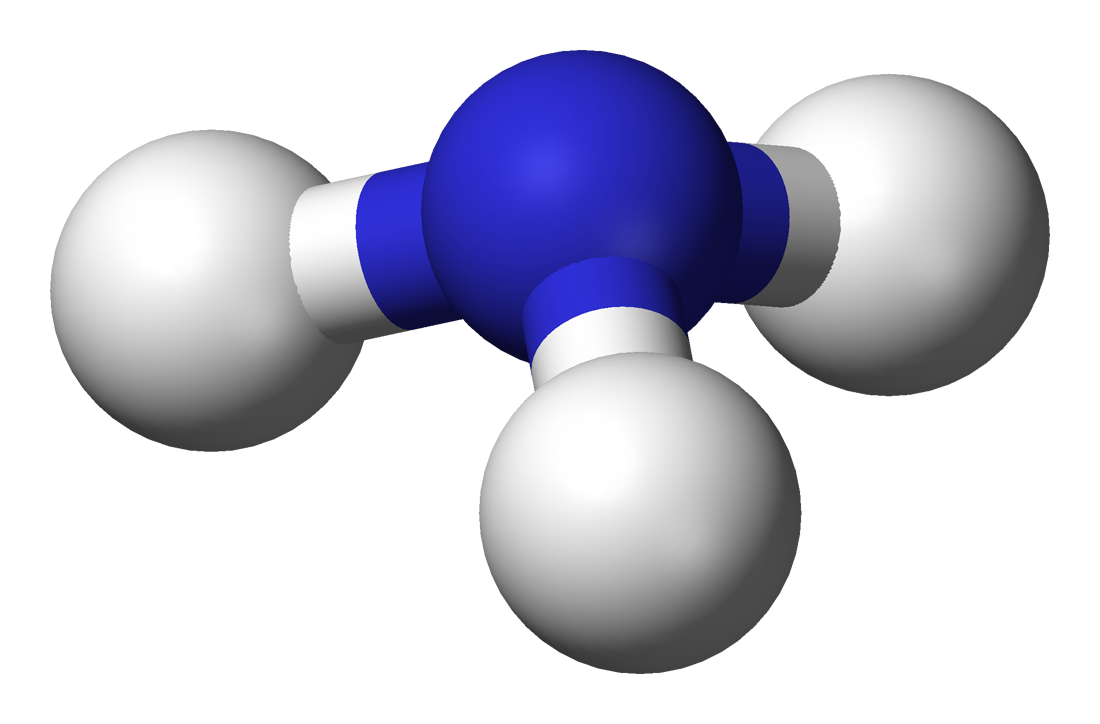 Ammonia or azane is a compound of nitrogen and hydrogen with the formula NH3. It is a colorless gas with a characteristic pungent smell. Ammonia contributes significantly to the nutritional needs of terrestrial organisms by serving as a precursor to food and fertilizers. Ammonia, either directly or indirectly, is also a building block for the synthesis of many pharmaceuticals and is used in many commercial cleaning products. Although common in nature and in wide use, ammonia is both caustic and hazardous in its concentrated form.

NH3 boils at −33.34 °C (−28.012 °F) at a pressure of one atmosphere, so the liquid must be stored under pressure or at low temperature. Household ammonia or ammonium hydroxide is a solution of NH3 in water. The concentration of such solutions is measured in units of theBaumé scale (density), with 26 degrees baumé (about 30% (by weight) ammonia at 15.5 °C or 59.9 °F) being the typical high-concentration commercial product.

Globally, approximately 88% (as of 2014) of ammonia is used as fertilizers either as its salts, solutions or anhydrously. When applied to soil, it helps provide increased yields of crops such as maize and wheat. 30% of agricultural nitrogen applied in the USA is in the form of anhydrous ammonia and worldwide 110 million tonnes are applied each year.

Ammonia is directly or indirectly the precursor to most nitrogen-containing compounds. Virtually all synthetic nitrogen compounds are derived from ammonia. An important derivative is nitric acid. This key material is generated via the Ostwald process by oxidation of ammonia with air over a platinum catalyst at 700–850 °C (1,292–1,562 °F), ~9 atm. Nitric oxide is an intermediate in this conversion:

Nitric acid is used for the production of fertilizers, explosives, and many organo nitrogen compounds.

Ammonia is also used to make the following compounds:

·        Hydrazine, in the Olin Raschig process and the peroxide process

·        Hydrogen cyanide, in the BMA process and the Andrussow process

·        Hydroxylamine and ammonium carbonate, in the Raschig process

·        Urea, in the Bosch–Meiser urea process and in Wöhler synthesis

Ammonia can also be used to make compounds in reactions which are not specifically named. Examples of such compounds include: ammonium perchlorate, ammonium nitrate, formamide,dinitrogen tetroxide, alprazolam, ethanolamine, ethyl carbamate, hexamethylenetetramine, and ammonium bicarbonate.

Household ammonia is a solution of NH3 in water (i.e., ammonium hydroxide) used as a general purpose cleaner for many surfaces. Because ammonia results in a relatively streak-free shine, one of its most common uses is to clean glass, porcelain and stainless steel. It is also frequently used for cleaning ovens and soaking items to loosen baked-on grime. Household ammonia ranges in concentration by weight from 5 to 10% ammonia.

Solutions of ammonia ranging from 16% to 25% are used in the fermentation industry as a source of nitrogen for microorganisms and to adjust pH during fermentation.

As early as in 1895, it was known that ammonia was "strongly antiseptic ... it requires 1.4 grams per litre to preserve beef tea. In one study, anhydrous ammonia destroyed 99.999% of zoonotic bacteria in 3 types of animal feed, but not silage. Anhydrous ammonia is currently used commercially to reduce or eliminate microbial contamination of beef. Lean finely textured beef in the beef industry is made from fatty beef trimmings (about 50–70% fat) by removing the fat using heat and centrifugation, then treating it with ammonia to kill E. coli. The process was deemed effective and safe by the US Department of Agriculture based on a study that found that the treatment reduces E. coli to undetectable levels. There have been safety concerns about the process as well as consumer complaints about the taste and smell of beef treated at optimal levels of ammonia. The level of ammonia in any final product has not come close to toxic levels to humans.

Because of ammonia's vaporization properties, it is a useful refrigerant. It was commonly used prior to the popularisation of chlorofluorocarbons (Freons). Anhydrous ammonia is widely used in industrial refrigeration applications and hockey rinks because of its high energy efficiency and low cost. It suffers from the disadvantage of toxicity, which restricts its domestic and small-scale use. Along with its use in modern vapor-compression refrigeration it was used in a mixture along with hydrogen and water in absorption refrigerators. The Kalina cycle, which is of growing importance to geothermal power plants, depends on the wide boiling range of the ammonia–water mixture.

For remediation of gaseous emissions

Ammonia is used to scrub SO2 from the burning of fossil fuels, and the resulting product is converted to ammonium sulfate for use as fertilizer. Ammonia neutralizes the nitrogen oxides (NOx) pollutants emitted by diesel engines. This technology, called SCR (selective catalytic reduction), relies on a vanadia-based catalyst.
Ammonia may be used to mitigate gaseous spills of phosgene.