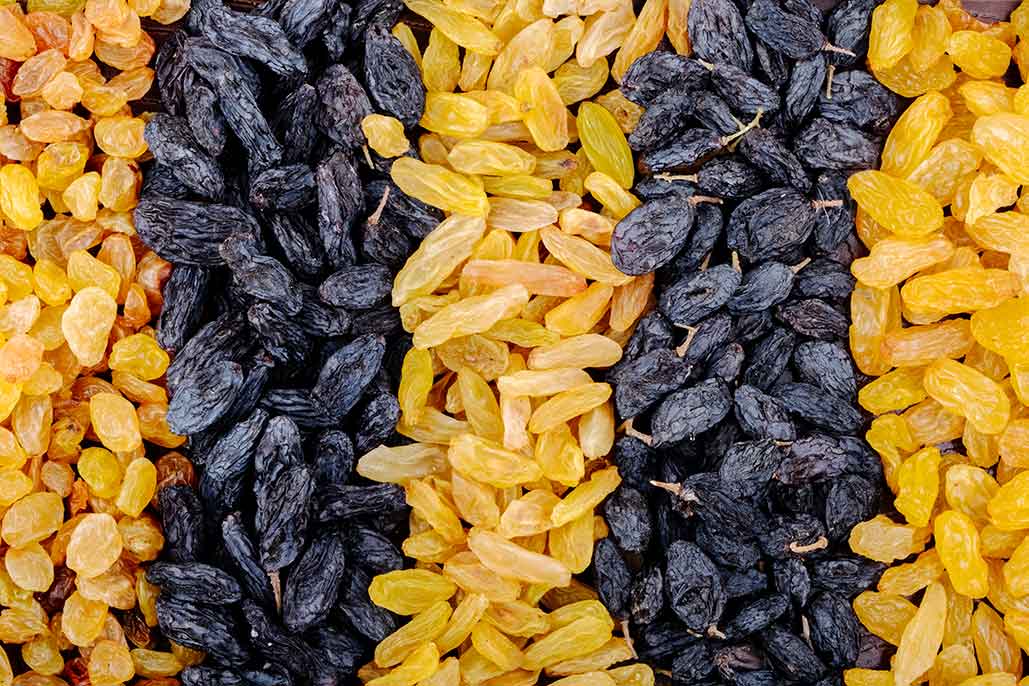 A raisin is a dried grape. Raisins are produced in many regions of the world and may be eaten raw or used in cooking, baking, and brewing. In the United Kingdom, Ireland, New Zealand, and Australia, the word raisin is reserved for the dark-colored dried large grape with sultana being a golden-colored dried grape, and currant being a dried small Black Corinth seedless grape.

The word "raisin" dates back to Middle English and is a loanword from Old French; in modern French, raisin means "grape", while a dried grape is a raisin sec, or "dry grape". The Old French word, in turn, developed from the Latin word racemus, "a bunch of grapes".

Raisin varieties depend on the type of grape used and are made in a variety of sizes and colors including green, black, brown, blue, purple, and yellow. Seedless varieties include the sultana (the common American type is known as Thompson Seedless in the United States), the Greek currants (black Corinthian raisins, Vitis vinifera L. var. Apyrena) and Flame grapes. Raisins are traditionally sun-dried, but may also be water-dipped and artificially dehydrated.

"Golden raisins" are generally dried in dehydrators with controlled temperature and humidity, which allows them to retain a lighter color and more moisture. They are often treated with sulfur dioxide after drying.

Black Corinth or Zante currant are small, sometimes seedless raisins that are much darker and have a tart, tangy flavor. They are usually called currants. Muscat raisins are large compared to other varieties, and also sweeter.

Grapes used to produce raisins in the Middle East and Asia include the large black monukka (or manucca) grapes that produce large raisins.